What is Black History Month?

For us, it is a time to reflect, learn and grow. ShelterBox Head of Volunteering in the UK, Hilary Burr, talks about some of the black history surrounding her local area and our head office in Truro, a town in Cornwall, UK.

The story of Joseph Antonio Emidy

We were on a family walk around Truro, Cornwall when my mum guided us into Kenwyn churchyard. With some ceremony, she led us to the grave of Joseph Antonio Emidy and went on to tell us his incredible story. His headstone gives few clues to his remarkable life. In fact, it obscures significant details by calling him a ‘native of Portugal.’

The reality is that Portuguese traders had captured and enslaved Emidy in Guinea. The traders had forced Joseph to work on plantations in Brazil before they brought him to Portugal. As a contemporary account explains, “Here he manifested such a love for music, that he was supplied with a violin and a teacher; and in the course of three or four years he became sufficiently proficient to be admitted as one of the second violins in the orchestra of the opera at Lisbon.”

English naval commander, Sir Edward Pellew, and his crew regularly visited the Lisbon Opera House while waiting for their ship, ‘The Indefatigable,’ to be repaired. They were so impressed by Emidy that a press gang was sent to kidnap him so that he could play music to entertain the crew. The ship set sail the following day and Emidy spent four years playing “hornpipes, jigs, and reels”.

Joseph regained his freedom when the crew finally discharged him from the boat in the port of Falmouth on 28 February 1799. In 1802, he married a local woman named Jenefer Hutchins. He started taking on music students, gradually bringing musicians together to create an orchestra first in Falmouth and later in Truro. 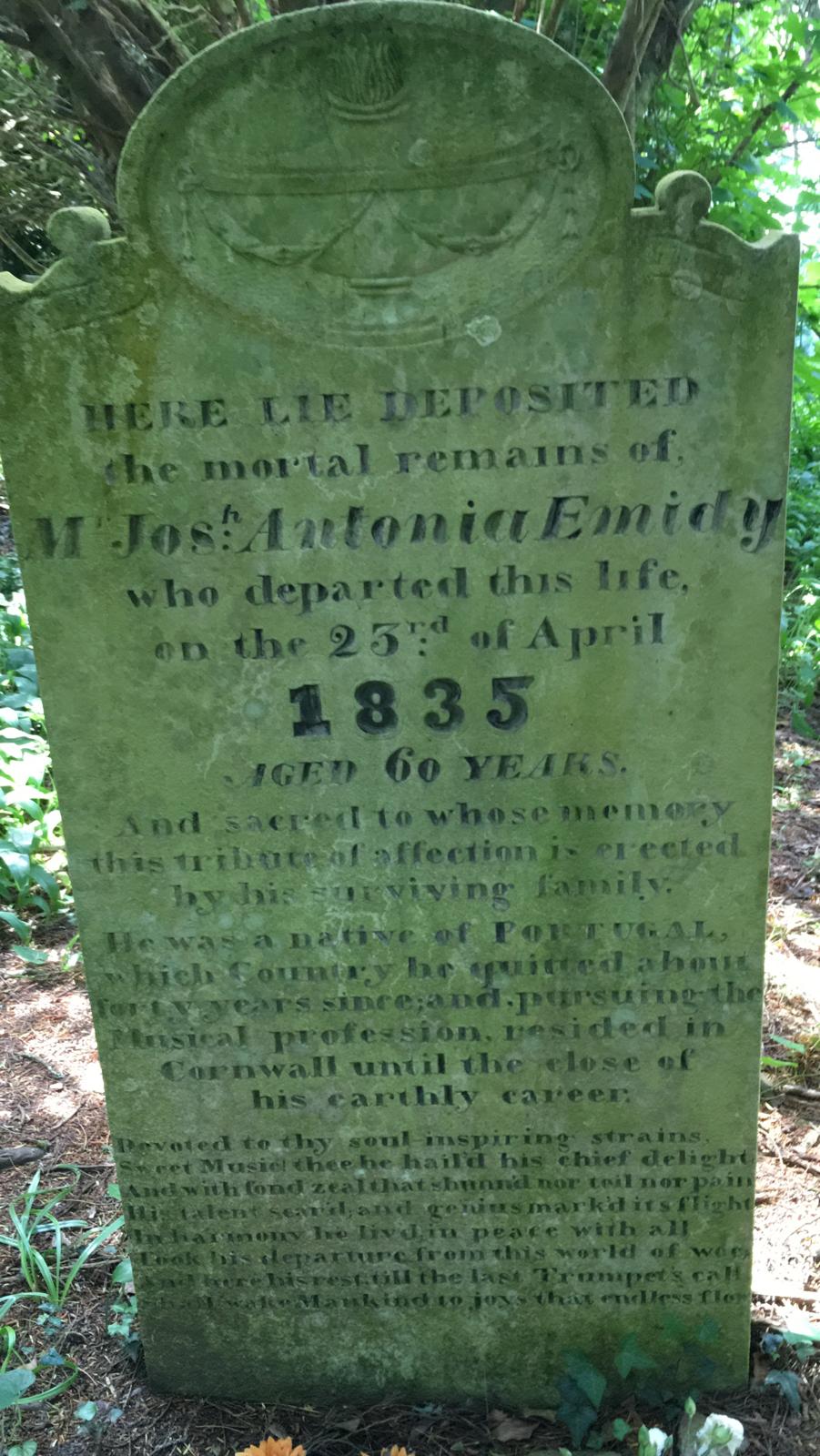 The headstone of Joseph Antonio Emidy in Truro, Cornwall.

A brilliant musician in the shadows

As well as being ‘an exquisite violinist’ and teacher, he was also a composer.

James Silk Buckingham, an anti-slavery reformer and MP had played his music at a meeting of professional musicians in London. His compositions were ‘highly approved’ of, but Buckingham was told he should not bring Emidy to London because ‘his colour would be so much against him.’

Cornwall, however, held Emidy in high esteem and celebrated him as the foremost musician in the Southwest. Sadly, Emidy never published his music, and no manuscripts have survived. We have been denied the opportunity to hear the music of ‘Britain’s first composer of the African diaspora’ because of his race.

Although his music has been stolen from us by society at that time, nevertheless, Emidy shows us that black history is everywhere, and is connected to all of us. Learn more about his story and his life here.

Our ultimate Christmas gift guide will inspire you to choose the best unique, ethical, and fun gifts.
Read Post

COP26: The climate crisis needs our anger – but it also needs our hope