Since 2000, we have responded to a number of major disasters that shook whole countries and their people. Explore some of them here.

On 26 January 2001, a powerful earthquake hit the state of Gujarat, western India.

The 7.7 magnitude earthquake destroyed over 1 million structures including historic buildings.

This was the first disaster that the newly formed ShelterBox team were able to respond to.

Working in partnership with local Rotary contacts, we supported families with emergency shelter aid and other essential items.

People were swept away by the monster waves, which arrived rapidly and with little warning.

The deadly tsunami devasted the nearest coastlines of Indonesia, but also caused destruction across the coasts of Thailand, India, Sri Lanka, even making it as far as Somalia, the Seychelles and South Africa. A total of 14 countries were affected.

The disaster was caused by a type of earthquake called a ‘megathrust earthquake’, which forces one of the earth’s tectonic plates to be thrust under another. It was the fourth largest recorded earthquake, measuring more than magnitude 9, and caused a 1,200km section of the earth’s crust to shift beneath the Indian ocean.

The resulting tsunamis reached 20m in height at landfall in parts of Aceh, Indonesia, and travelled at speeds of up to 800km per hour. In some places, the waves spread 3km inland carrying debris and seawater with them. They devasted everything they hit, and retreating waters eroded whole shorelines.

A massive surge of support from around the world for the people affected by this huge disaster enabled the ShelterBox team to launch its largest-ever response in the organisation’s short history. Working closely with local Rotary partners in Indonesia and Sri Lanka, we provided emergency shelter aid and other essential items to thousands of affected families.

The initial shock of 7.0 magnitude was quickly followed by aftershocks of 5.9 and 5.5. Aftershocks continued to batter the area throughout the following weeks.

The devastation was on a scale previously unimaginable – homes were turned to rubble, families were separated, livelihoods were completely destroyed.

We were working in Haiti eighteen months before the earthquake struck, delivering emergency aid after a series of hurricanes left thousands of families homeless.

Following the devastating earthquake in 2010, over 28,000 families were supported with essential ShelterBox aid. This included tents to provide families with emergency shelter to start recovering, kitchen sets to allow them to cook and eat together again, and mosquito nets to protect against Insect-borne diseases like malaria.

More about the earthquake

On 11 March 2011, an earthquake off the Pacific coast of Tohoku, measuring 9 magnitude ravaged Japan. The earthquake triggered a tsunami with giant waves of up to 10 meters.

Aftershocks also hit the area the next day, at 6.2 magnitude. Over 20,000 people lost their lives, and over half a million were made homeless.

Similar to the Boxing Day tsunami, it was caused by a type of earthquake called a ‘megathrust earthquake’, which forces one of the earth’s tectonic plates to be thrust under another and shifting the earth’s crust.

With winds of 195mph and waves up to 7ms, the typhoon is still the largest storm ever recorded to make landfall. It is the deadliest on record in the Philippines, with more than 7,000 people losing their lives.

A total of around 11 million people were affected, with 6 million people displaced. Six million workers lost their source of income when agriculture and boats were destroyed. 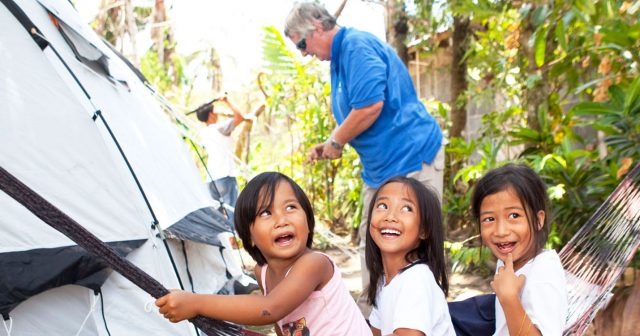 Read on to see how it all began and take a look at what you’ve helped us achieve.

Take the quiz to learn about some of the most memorable responses in our history.

Meet the people your support is helping

In 2000, the idea for ShelterBox was hit upon by the Rotary Club of Helston-Lizard in Cornwall, when Rotary encouraged members to come up with projects to mark the Millennium.

Explore the gallery of images from some of the most memorable responses in our 20-year history.